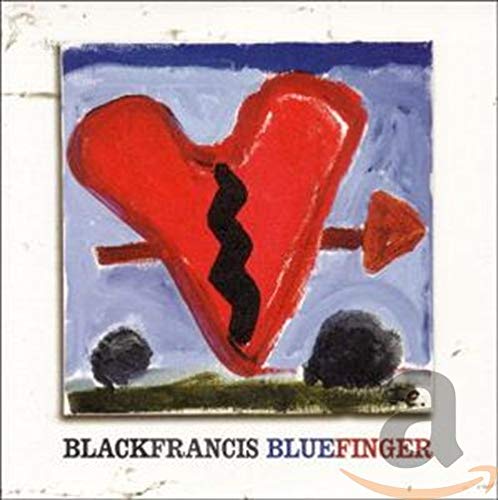 The Pixies' iconic lead singer Frank Black dons his decades-old moniker - Black Francis - and, imbued by the spirit of eccentric Dutch painter/musician Herman Brood, recorded a brand new set of 11 songs, collectively titled Bluefinger. Black Francis recorded Bluefinger in September 2006 in Portland, OR. Appearing on guitars, harmonica and vocals, Francis was joined in the studio by drummer Jason Carter (Guards of Metropolis), Violet Clarke on vocals, and bassist Dan Schmid (The Visible Men). Mark Lemhouse produced the album. Bluefinger showcases a Herman Brood cover, You Can't Break a Heart and Have It, and ten Black Francis originals: Captain Pasty, Test Pilot Blues, Lolita, Tight Black Rubber, Angels Come to Comfort You, Your Mouth Into Mine, Discotheque 36, She Took All the Money, Blue Finger, and Threshold Apprehension.

Musicians gain songwriting stimulus from broken relationships, bad intentions, and pop culture, but leave it to Black Francis (a.k.a. Frank Black) to find inspiration in the works of the late Dutch painter Herman Brood, who was also recognized as a musician fronting His Wild Romance. The Pixies' alter ego alludes to Brood either candidly or implicitly in all 11 songs, veering far from the Nashville-and-Memphis tones of the last two Black albums for a return trip to his raucous roots on loose-knit tracks like "Lolita" and "Tight Black Rubber" or the rapturous "She Took All the Money," a duet with Violet Clarke. "Captain Pasty" brings a perfunctory reminder of how Black's style once aroused a young Kurt Cobain, its chugging bass melodies and burning bark remindful of Nirvana's Incesticide, while "Angels Come to Comfort You" chugs along like a country ode, referencing the Hilton hotel where Brood died in 2001 and calling him "prettier than Brando" and "punker than punk." He even takes to covering BroodÂs "You Can't Break a Heart and Have It," its lashing rhythm section and call-and-response vocals a dead ringer for the Bowery circa 1977--and Black Francis and band about 14 years later. "i"--Scott Holter